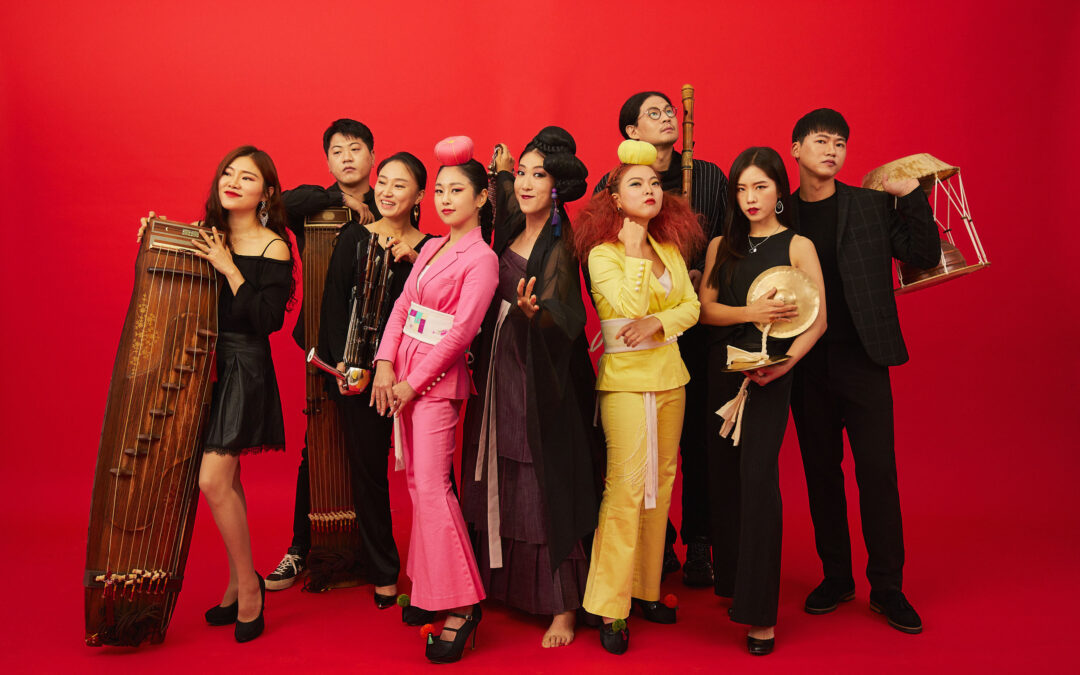 AK DAN GWANG CHIL
Ak Dan Gwang Chil is from South Korea. The group uses percussions, string- and wind instruments and has three vocalists. The multi-praised group invites you to a journey where we meet a culture that partly has been blown to pieces by the division of their country. Tradition and modernity is gently intertwined by these beautiful and traditional instruments that melt together with the bands ambition to present themselves before a modern audience. Trancendental elements based on shaman culture that can been found in all of Korea meets pulsating modern influences – everything presented in a lively prominence. Ak Dan Gwang Chil wants to remind the listener to nurture and protect cultural heritage. This is a unique opportunity to experience the meeting of Korea in Ådalen.

EBO KRDUM
Ebo Krdum gives us desert rock, afro beat and Scandinavian folkmusic in a tingling and harmonious mixture. He learnt to build and play his instrument on his own and perhaps that is the reason why the bond between melody and artist goes especially deep in his music. His songs loosen the ties on our hearts and pulsating instruments fill us with new strength. Because of his political activism and connection to the opposition movement Ebo was forced to flee Sudan 2010 and much of his music had been embossed by this experience and the revolution that led to the end of Sudans former dictator and regime. He invites us with tenderness to stand up against oppression and to dare to believe that there is a peaceful road ahead.

DAWDA JOBARTEH
Dawda Jobarteh was born in Gambia. His father Amadu Bansang Jobarteh and grandfather Alhaji Bai Konte was both koramusicians and part of the absolute elite when it came to furthering and passing down the music tradition to new generations. The Kora is a beautiful instrument with a delicate sound. It wasn’t until Dawda came to Denmark that he picked up the kora and started to learn to play it. By doing this he can in turn pass down the tradition along with new influences and inspiring arrangements. He has okayed together with Pierre Dorge (New Jungle Orchestra) the are famous for their avant-garde jazz influences. Apart from having been in Sweden and at Urkult he has played at Roskilde, toured around West Africa and in India. His latest tour has been together with three members of Admeta String Quartet and the result has been a beautiful and eloquent concert that reminds us of the amazing human ability to create and share beautiful experiences.

FRIDA HYVÖNEN
Frida Hyvönens writes songs that are fun, filled with melancholy and grandeur and her lyrics – written half of the time in Swedish and the other half in English – are always saturated by her distinct characteristics. Her music is marked by blinding light and ample darkness and the two polarities create at resonance that is both thrilling and heart-breaking. The piano is her faithful companion throughout all her music but we can hear her accompanied by everything from powerful drums to tender flutes. We are without a doubt in for a magical musical experience among the trees above the rapid waters in Näsåker this coming august.